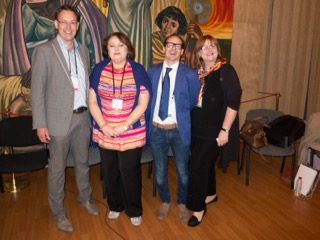 I have been privileged to have attended four European Obesity Congresses. Over the years I have observed and have been part of the development and expansion of patient involvement in the Congress experience.

The first year of my involvement, I was invited to speak at the 2013 ECO in Liverpool, which is my home city. I was invited to speak about my experiences as a patient as part of the DORIAN project seminar. The feedback I received following the event was really positive and I made some great personal connections. I was also fortunate to have been able to attend the pre-Congress bariatric surgery session. The speakers’ dinner that year was held at the Liverpool Football Club, which had a strong global reputation among attendees.

2014’s Congress was held in Sofia, Bulgaria. I was delighted to see many more members of patient communities attending. Friendships were made and bonds were forged. We held an organizing meeting where we participated along with several key European health professionals. The conference centre that year was a daunting Soviet era building. We spent time together and discussed developing a formal organisation. The seeds of a European patient community were sown there in Sofia.

2015 saw us travelling to Prague for the Congress. Prague is a beautiful and historic city. We were hosted by Patient Council member, Alexandra Fraisova. We held our first formal Patients Council meeting. As I looked through the photographs I took at the event – it brings back happy memories.

In 2016, the European Obesity Summit was held in Gothenburg, Sweden, where we were hosted by Patient Council Steering Committee member Christina Fleetwood and  Swedish Patient Council member Orley Andreasson and his national association HOBBS. This most recent meeting saw the Patient Council reach a new level of engagement. Members took part in the opening plenary session, the media master classes and several formal sessions. We had a Patient Council lounge where we could spend time together and network between sessions and meetings, and we were delighted to welcome new members to our community.  I spoke with many professional attendees and exhibitors at the conference, and the Patient Council is now truly a central part of the European Obesity Congress process.

Although it is only August, plans are already being made for our attendance at ECO 2017 in beautiful Porto, Portugal. I would like to extend thanks to Sheree Bryant, Euan Woodward and Tommy Visscher for their professional and personal support. We also like to thank the Executive of EASO for their belief and investment in the Patients Council.

EASO / EAPC Media Masterclass: key issues at the intersection of obesity and cardiology